A more animated way to show the battler order for atb battles!

If you want to give additional support, checkout my patreon! https://www.patreon.com/raizen884

You can also join us on discord! https://discord.gg/Kh9XXZ2

Couple of proposals to make this better:

Can you make it so that when you target an enemy or ally, that it also causes the player frame in the battle frame menu will also flash? Would definitely help when you are fighting multiples of the same enemy and want to take out the enemy who is going to attack next.

Second, Could you make it so that the battle text is shifted downward so it doesnt cover up the Battle Order UI Element?

Oh the battle text I think its better to deal as a separate plugin :), I think I can take a look at that. I got your idea, its a nice add to the strategy, I'll see what I can do about that part. 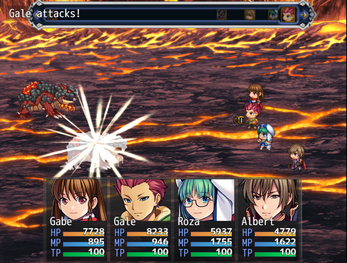